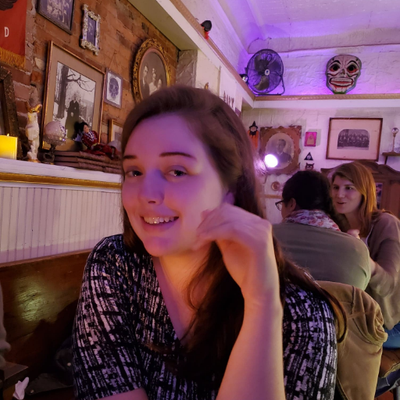 Emily Turner is a Maryland native who is incredibly uncomfortable writing in the third person. She spent four years in Rochester learning how to dance and play games and is now back in her home zip code to make spreadsheets and slowly go insane while working from home during the pandemic. The caretaker of one cat and many plants, Emily enjoys being surrounded by not-dead things. She spends her free time swing dancing (when there's not a virus going around) and making a problematic amount of baked goods. Emily is at IndieCade because of a terrible horrible idea she got during her third year of college: ""What if there were dating sims with all the men in games who don't respect you?"" She then went and talked to about a hundred women at her college who had been harassed by men in STEM. With the help of a truly awesome team of students, she helped make Gamer Girl - a harassment simulator which featured all the awful stories she had learned about.