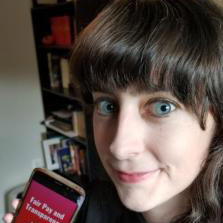 Devan Soyka is a freelance game writer and a member of VOW, the Voltage Organized Workers. After a childhood of video games she earned a B.A. in English and a B.A. in Spanish from James Madison University, and was afterward accepted by the JET Program to teach EFL in Japan. A contact there led her circuitously back to games after several years of editing for watchdog magazines and architectural firms. In 2017 she began to write for "Lovestruck," an interactive romance app, and later helped form VOW along with the other Lovestruck writers. In the summer of 2020, with the help of CODE-CWA, VOW successfully struck for fair pay. Tumblr: vowtogether